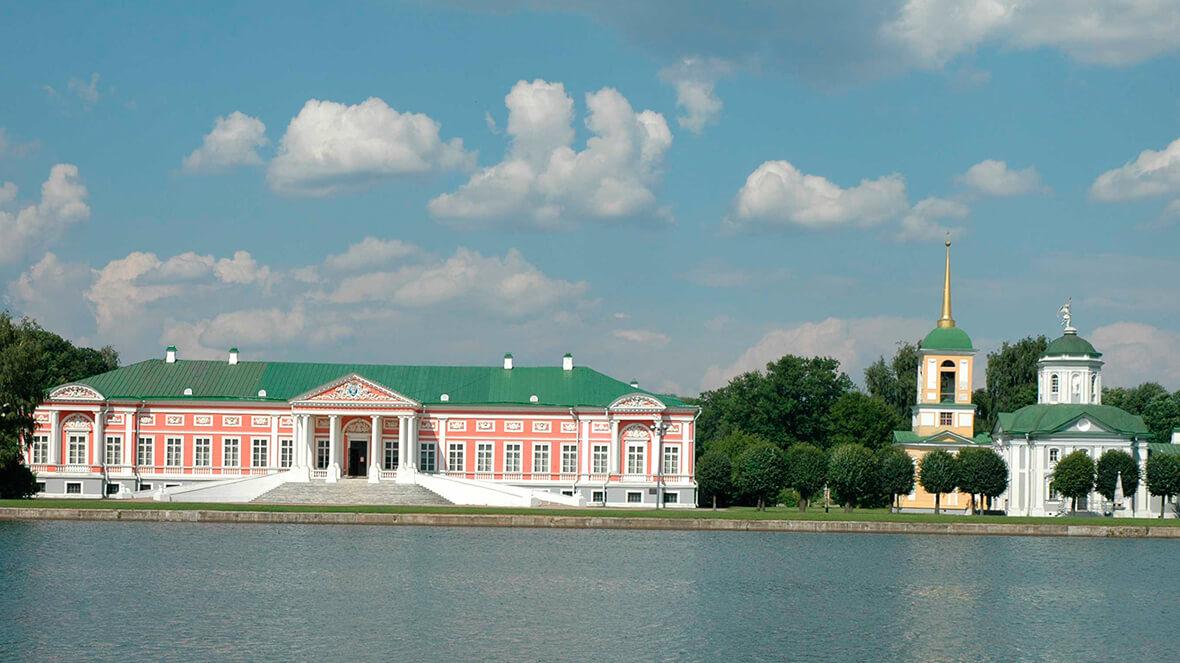 The Kuskovo Memorial Estate is a fine example of the 18th century architecture and park landscaping. The estate originally owned by the Sheremetev family as a summer countryside residence. 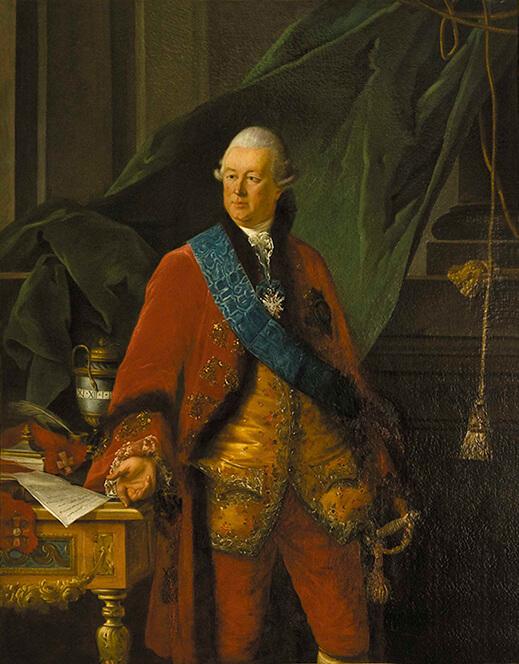 Kuskovo is first mentioned in documents dating from the beginning of the 16th century. First it was a small boyar estate only about seven kilometers from Moscow. The land was not good for cultivation, and was thus of little economic significance. The estate was however an ideal hunting ground, and it even attracted the attention of the Tsar. In 1715 the Kuskovo estate was bought by Count Borisn Sheremetev from his younger brother Vladimir. The elder Sheremetev was a well-known Field Marshal in the times of Peter the Great, a hero of the battle of Poltava, and a companion-in-arms to the Tsar. He was later given the title of count. His son and heir Piotr Sheremetev after the marriage to Princess Varvara Cherkasskaya in 1743 became one of Russia's richest noblemen. The neighboring Cherkassky estate, Veshniakovo, was added to Kuskovo, and in accordance with the fashion of the day, a huge country residence was built on the combined grounds for holidays and pleasure trips.
The construction of the estate was carried out in the 1740s-1790s on an area of over 300 hectares. It was the work of hundreds of serf and hired masters, both Russian and foreign, among them the well-known Russian architect K.Blank, Yu.Kologrivov, serf architects F.Argunov, A.Mironov, G.Dikushin, sculptor I.Zimin, garden landscaper A.Focht, the moulder J.Just and others. 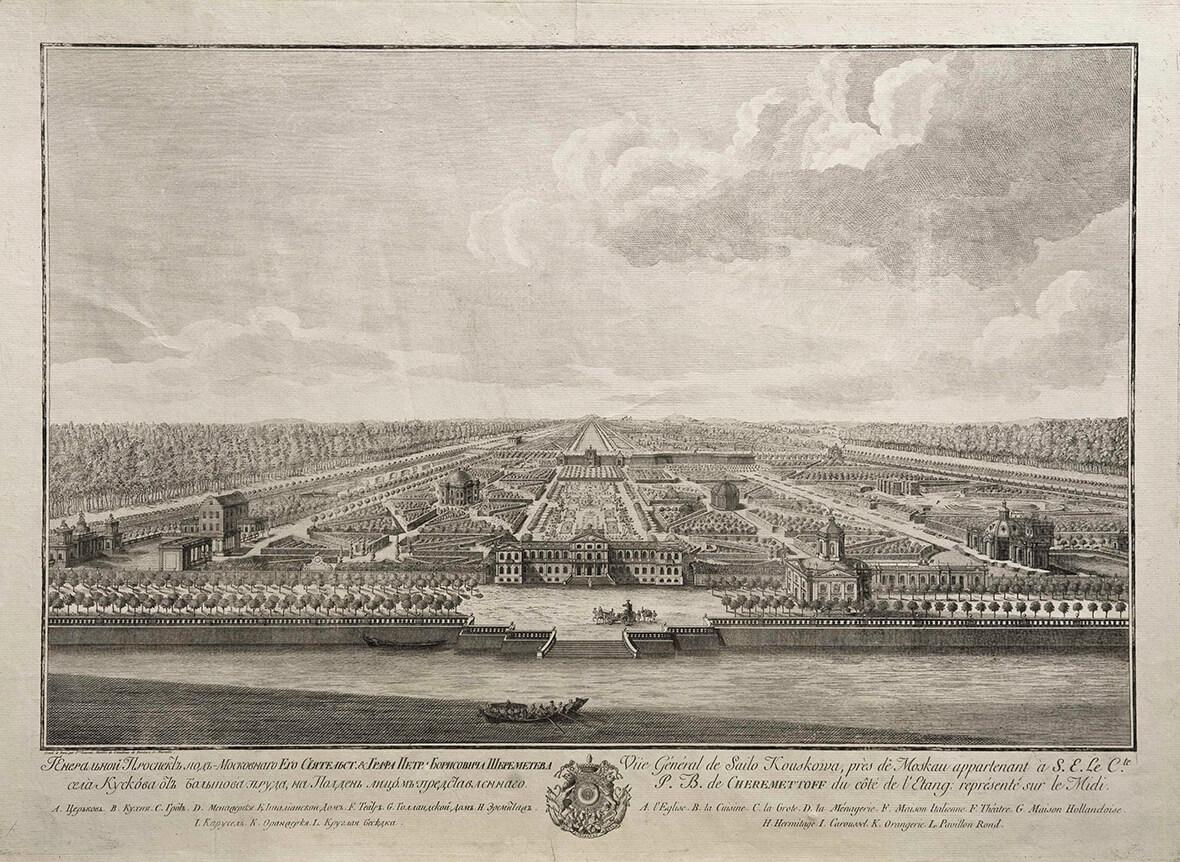 The main view of the Kuskovo Estate in Moscow Region. Depicted from the lake side. 1771-1774

Plate from the series “Views of the Pavilions and Garden in Selo Kuskovo, wich belongs to His Majesty Count Petor Borisovich Sheremetev”.

The 18th century plans and drawings give us an idea of the special layout of the estate. The axis more than three kilometers long runs from the south-east to the north-west of the estate and serves to link up three component parts:
– the ground beyond the Pond;
– the English landscape park. The House of Solitude, the Portrait Gallery and the New Theater were situated in this part of the park;
– the Formal Garden with the park pavilions is the best preserved part of the estate.
The Great Pond together with the smaller ponds and the canal encircling the Formal Garden make up the waterways of the estate. On gala occasions the “sea battles” and fireworks were displayed on the Pond. 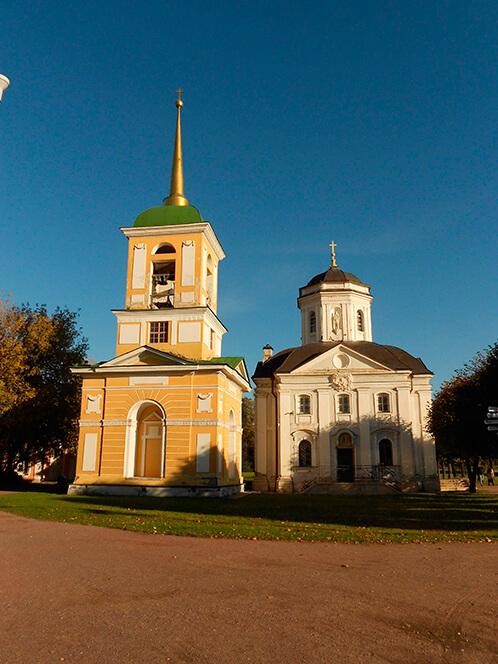 On the Main Court the oldest building of the Estate has survived - the church of The Origin of the Honorable Wood of the Honorable and Life-Giving Cross of the Lord (the Church of the Holy Savior) (1737 – 1739, unknown architect). It was built in the Baroque style of the times of the Empress Ann and was richly decorated with white stone carvings. Only four statues of the Apostles have survived on the drum. The proportions and dimensions of the building are the neoclassical wooden bell-tower built in 1792 under the guidance of serf architects A.Mironov and G.Dikushin.

The Palace is the centerpiece of the estate. It was built in 1769-1775 in the style of early classicism under the direction of Moscow architect Karl Blank. 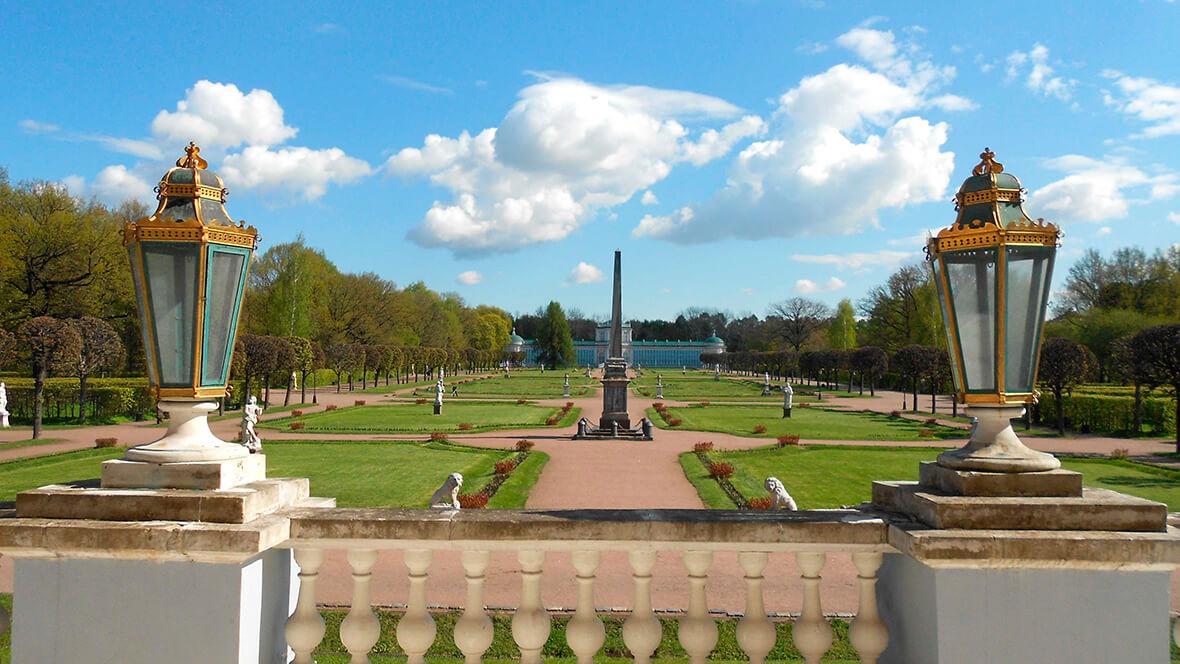 On the northern side of the Palace is a Formal Garden which retains to the present day its original layout. The central and the most beautiful part of the Garden is the "parterre" between the Palace and the Orangery. It is decorated with flowerbeds and marble statues.

Numerous pavilions were built in the park for the repose and amusement of the guests. There is a Dutch House and the Hermitage in the western part of the Garden. A small architectural ensemble in the eastern part contains the Italian House, the Grotto pavilion and five houses for poultry – Menagerie. 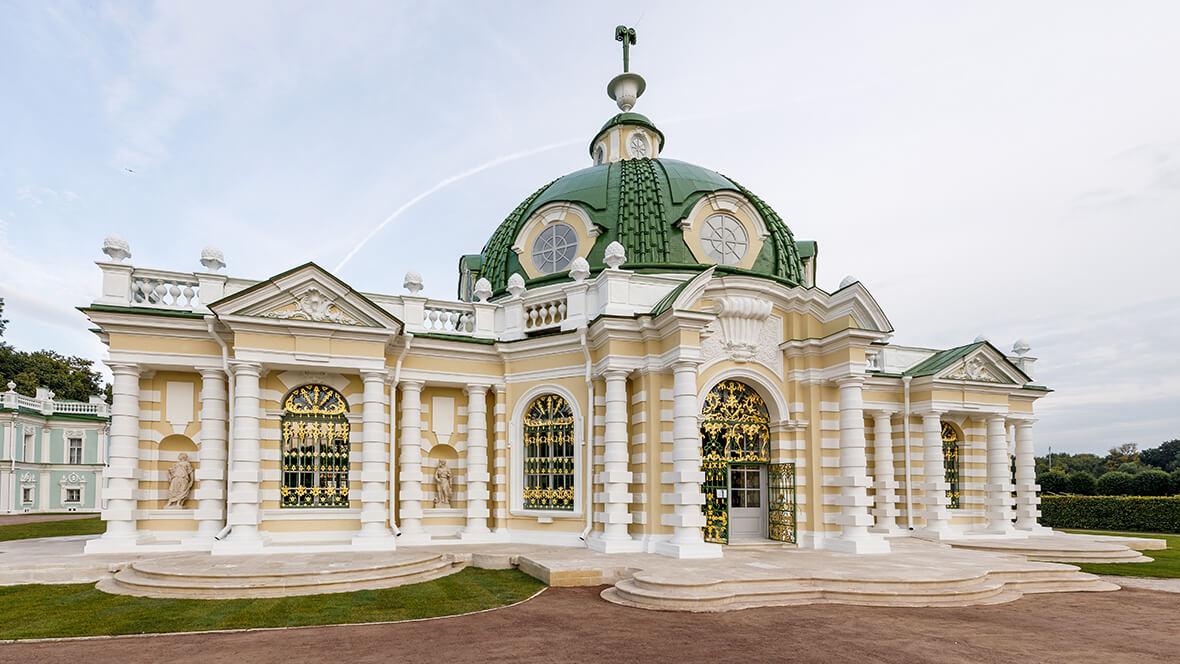 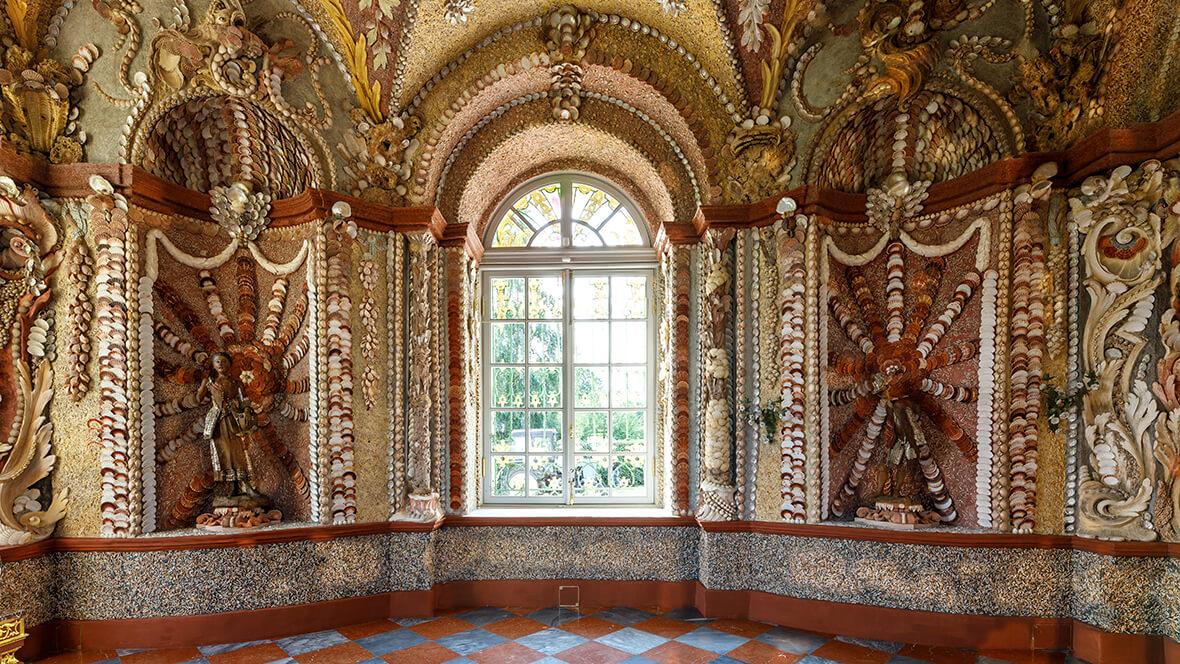 One of the main architectural rarity in the Estate is the Grotto (1756 – 1761. Architect Feodor Argunov). The Italian word “Grotto” means “the Cave”. It is decorated to look like the underwater cave, the mythological kingdom of the god of sea Neptune. Grotto in Kuskovo is the only pavilion of this type in Russia where the authentic decorations made of seashells still preserved. 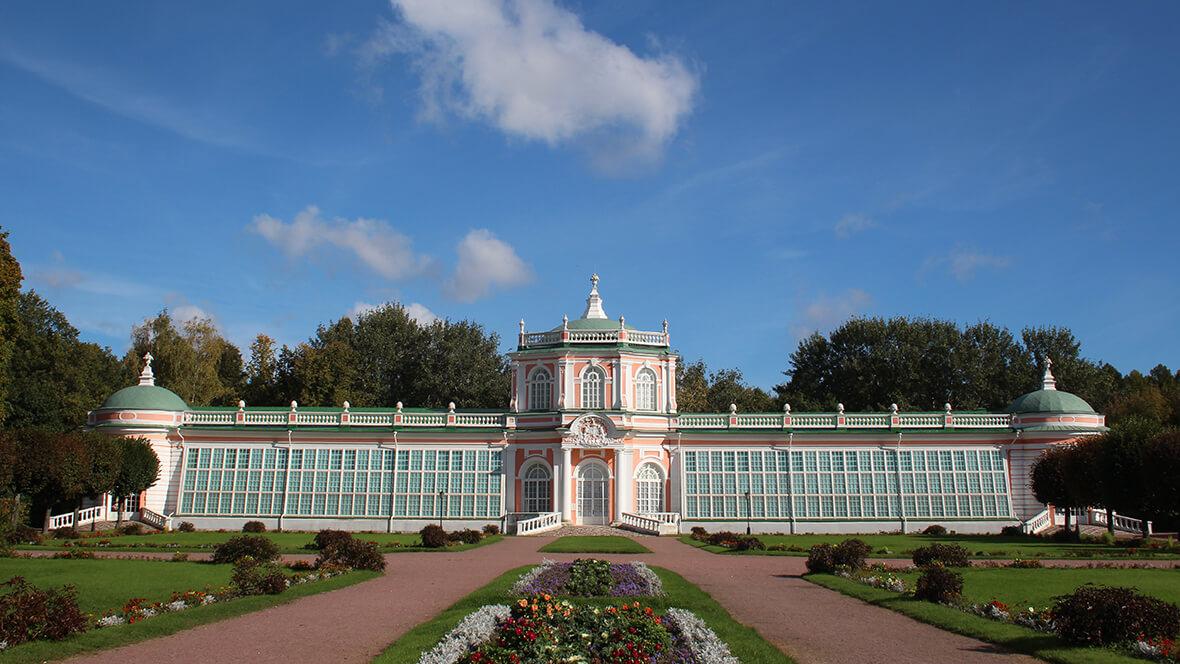 On the opposite side of parterre, there is the magnificent building of the Big Stone Orangery (Greenhouse) (1762–1765, architect Feodor Argunov). Present day the Orangery is serves as an exhibition space of the Museum.
The entertainments in the park included the so-called Avenue of games with swings, a merry-go-round, performances on the stage of an open-air theatre and The New Theatre in the landscape park. The Sheremetev’s theater with serf actors was one of the best in Moscow in the 18th century.

The estate was exceedingly popular in the 18th century. On special occasions the number of its visitors would go up to 25,000–30,000 at once. 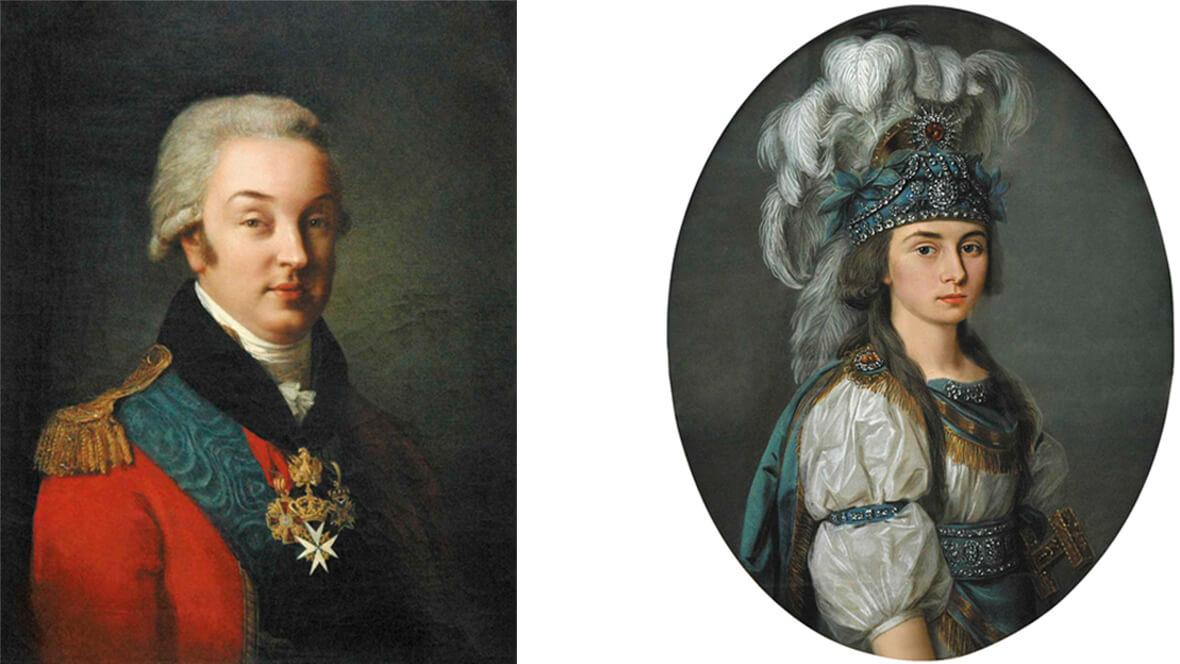 Portrait of Prascovia Zhemchugova as Eliana (the main part of «The Samnite Marriages» by A. Grétry.18th century 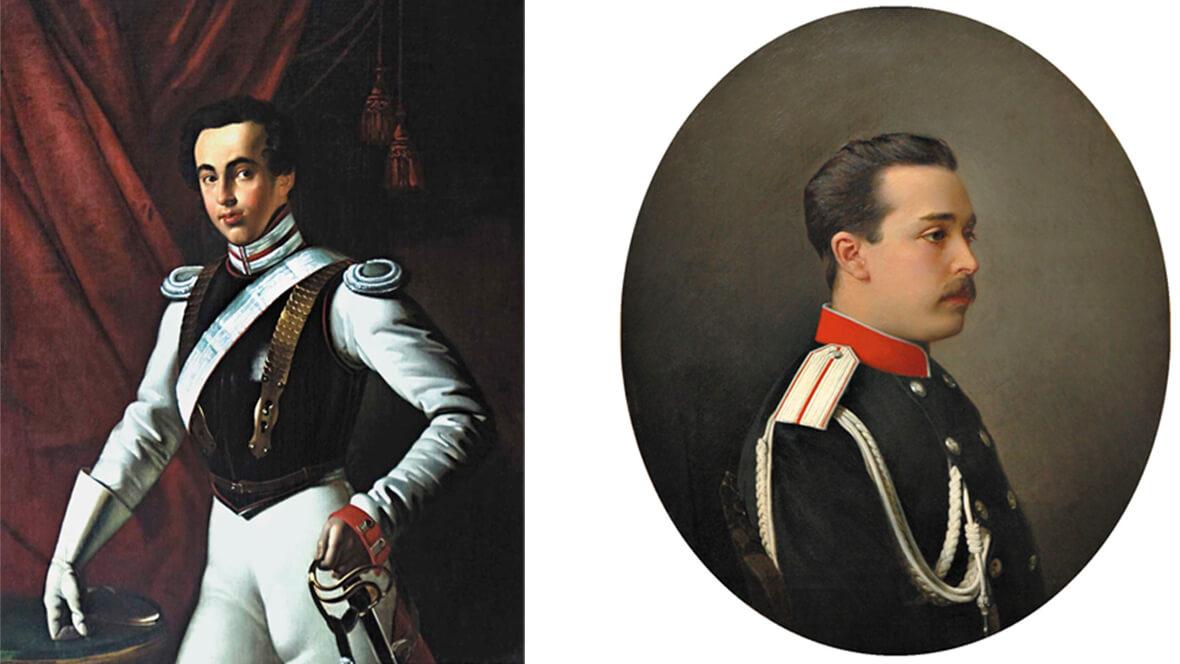 Portrait of Count Dmitry Nikolaevich Sheremetev. After the original by O. Kiprensky, 1824

Portrait of Count Sergey Dmitievich  Sheremetev. The second half of the 19th century

After the death of Peter Sheremetev, in 1788, his son Nikolay inherited the estate. Science 1809 the estate owned by Dmitry Sheremetev – the son of Nikolay and Praskovja Kovaleva (Zhemchugova). Science 1871 and up to the revolution of 1917 the estate belonged to Sergey Sheremetev. The heirs used the estate as a place for rest only.

The museum opened to the public in 1919 on the grounds of the Sheremetev’s estate, which had been nationalized in 1918 in accordance with the decree issued by the Council of People’s Commissars. This decree was intended to guarantee the protection of the country’s cultural inheritance and its valuable works of art. 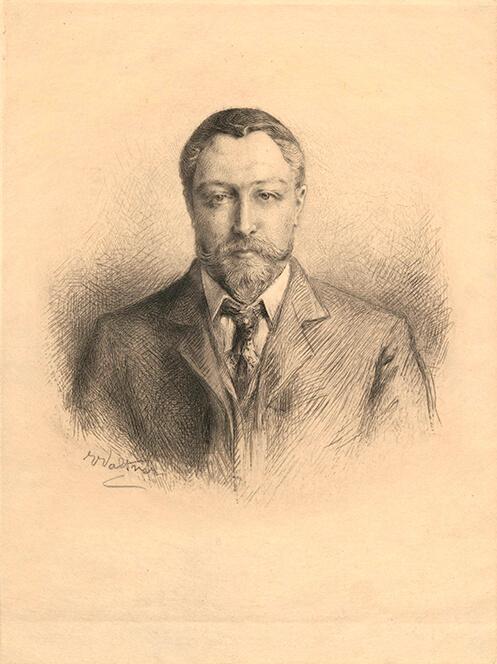 In 1937 the Moscow Museum of Porcelain was transferred to Kuskovo. Тhe Museum was founded in 1919 from the collections of such famous Russian porcelain collectors as Alexei Morozov, Lev Zubalov, and Boris Shchukin. In recent years this remarkable collection has been considerably enlarged as a result of the transfer to Kuskovo of valuable exhibits from the State Museum Reserve, and leading museums in Moscow and St.-Petersburg (including the Armoury and Hermitage). Present day the museum has more than thirty thousand exhibits of ceramic and glass ware.

Old traditions hospitality are being revived at the estate, and the museum organizes theatrical programs, receptions and other festivities. During the summer the Palace Dance Hall plays host to numerous concerts and musical festivals.